As parents, one of our greatest joys is to see our children enjoy or take an interest in something that is near and dear to us. In our family, one of these common parent-child interests is the love of music. There is some variation in tastes, but our daughters have surprised my husband and me in how much of “our” music they like.

As I watched some of the babies and toddlers in church this morning sway with the music of the liturgy, it reminded me again of the pure delight of seeing a child entranced by music. Little children do not put on a “music face” and listen with still dignity; rather, they jump into the music itself with abandon, their faces alight and their little bodies bouncing, swaying, or even hopping and running around like a dervish.

In Memory Monday: Playing Dress-Up there are a couple of pictures of my daughters doing the “Ugg-a-Wugg” dance while watching Peter Pan (the “People Peter Pan” with Mary Martin). This bouncy song from the musical was perfect for bopping along.

I noticed my daughters’ response to music even when they were little babies in the crib, but it was when they were walking and could “dance” that the fun really began. Our older daughter, who thought that the moon was actually a person because it had a face, surprised us one evening when we had gone out on our deck by yelling “Hi, Moon! I dancing for you!” and starting to hop and bounce; we called this particular dance the “butt-bounce.”

Taking our daughters to the Scottish Games was a highlight of the summer. Both of them loved the pipes and drums, the singers, and the Celtic harp competition, which was one of the things that inspired our younger daughter to choose the harp as her instrument. We particularly remember one summer at the games when our older daughter was two and a half. A large group of people had stopped to listen to some of the pipers, and B was so entranced that she danced around and around, hopping and kicking, jumping and waving her arms. Many in the audience eventually ended up watching her, and the pipers graciously continued to accompany the frolicking of the little whirlwind. Earlier in the day, when we had just arrived at the Games, she looked around in amazement at all the men dressed in kilts. “There’s a bagpipe! And there’s a bagpipe! Bagpipes all over!” When she wore the plaid skirt outfit shown below, she would proudly announce: “I a bagpipe!” Both daughters loved to put on “dance shows” for us to the accompaniment of pipes and drums or other Celtic music such as the Chieftains. 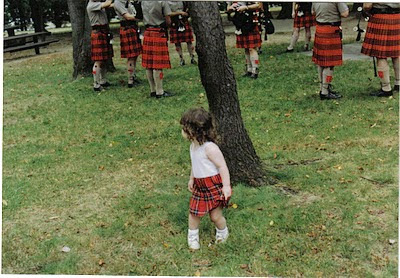 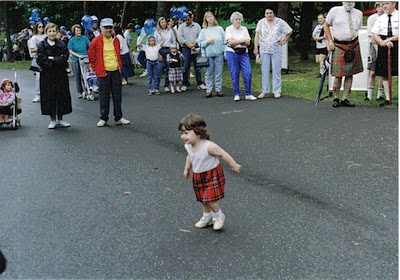 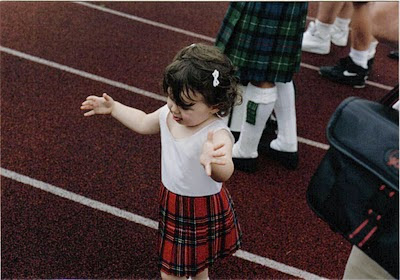 
Over the years I have enjoyed the late afternoon hours when my daughters would be practicing their instruments – B on the piano and E on the harp – as well as the music recitals, the dance recitals, and watching various types of musical entertainment with them. But the most pure enjoyment came from those unguarded, uninhibited moments of absolute abandon and absorption in music when they were so very, very young.
Posted by Greta Koehl at 7:31 AM