[The following post was first published December 1, 2009. This year my plan for the Advent Calendar of Christmas Memories is to repost my posts from last year, with a few additions or changes to a couple of them, and to add new posts on daily topics for which I have particular memories to share.]

The Christmas tree was (when I was growing up) and continues to be (now that I am grown and have children) an important part of my family’s Christmas tradition. I am slightly obsessed with ornaments and have more than I can fit on my tree. When we had an addition put on our house, we made sure that there was at least one little section where the ceiling was high enough to have a really tall tree.

Starting with the Christmas trees of my childhood: below are pictures of our Christmas tree from 1960. Until I was about nine years old, we always had a real tree. Sometimes we bought it from a lot and sometimes we would cut our own. This was a real adventure with my Dad – he was extremely picky, and I believe I followed in his footsteps in that respect. The type of tree would vary – pine one year, spruce another, fir still another. That made decorating it a challenge, since different trees have different types of “gaps,” different needle lengths, and branches of different strengths. Some ornaments look good on one type of tree but not another. 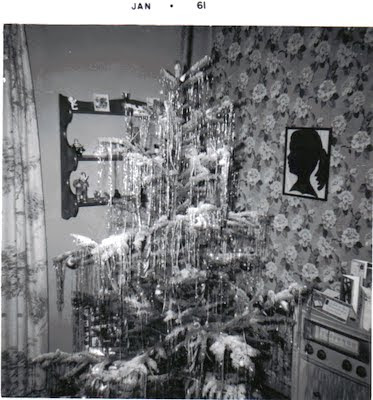 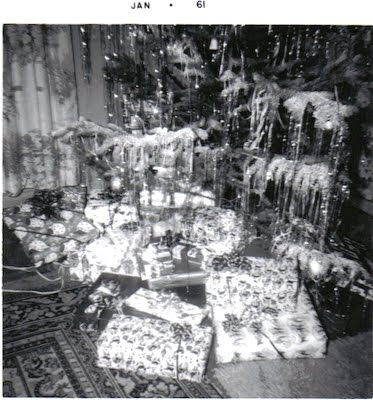 The biggest nightmare with the Christmas tree were the lights. Remember how the strings of light used to operate? If one bulb went out, the entire string went out. I believe that one of the great inventions of the 20th century was the string of lights that would stay on, no matter how many individual light would go out. My husband and I laugh at the Christmas tree decoration scenes in Jean Shepherd’s A Christmas Story every time we watch it (and we have watched it many times).

As you can see from the pictures, there was a lot of tinsel on our tree, and that was a major component of our tree decorations. It took hours to do properly (no throwing it on the tree!) and was, we believed, a real art. (My husband and I put tinsel on our tree for a couple of years, but with cats … that didn’t last.)

Then my mother bought one of those silver aluminum Christmas trees, and my brother and I thought it was an abomination. I believe she would put blue Christmas balls on it.

Later, when we lived in Texas, my mother bought a nice-looking artificial tree, which is the best you can do in a part of Texas that has mostly scrubby trees. We started to collect ornaments and used to have some beautiful old glass ornaments, but I don’t know what happened to most of them. The oldest ornaments I have are some that were made by a friend’s mother.

One of my favorite Christmas tree memories is described in Memory Monday: Visiting with Grandma Brinlee. My Uncle Leroy let me pick a tree to cut down and we decorated it with strings of popcorn and ornaments made with the silver liners from cigarette packs.

My husband and I buy real trees, the tallest ones we can fit in our house, and although I am still picky, I guess I have developed more of an eye and can pick out a good-looking tree fairly quickly (provided there are any good ones on the lot). Our daughters can and do provide plenty of input on the choice. We try to buy it the weekend after Thanksgiving and leave it up until my daughter’s birthday (also Orthodox Christmas), January 7. The smell still transports me to some of those Christmases from my childhood.
Posted by Greta Koehl at 4:33 AM