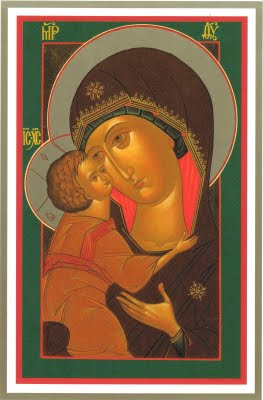 Above is the Christmas card my family and I sent out in 2009.
My mother did send out Christmas cards, and we displayed the ones we received. The location might vary; one of the Christmas tree pictures for Advent Calendar Day 1 shows Christmas cards on our TV-radio-record player console. (The console was made of blond wood. Oops, whole 'nother subject...) Other years, Mom wanted to be more inventive and taped the cards around a doorway, but that did not work very well. The heavy cards did not stay up, no matter what kind of tape she used. I don’t believe I have any old Christmas cards; it seems that Mom threw them all out. I, on the other hand, hold on to almost all of them like a packrat. The ones from insurance agents might get tossed.

Most of the cards we received when I was a child just had signatures or a brief note, though a few had letters enclosed. These letters were not “Christmas letters,” just regular personal letters written specifically to the addressees and enclosed with the card. We considered it a big bonus when we got a letter along with the card, so that’s probably why I started writing longer and longer notes inside the Christmas cards I sent out.

Another thing that inspired me to write and send Christmas letters was the fact that we had received some very good ones from friends and relatives. Some of the writers of these letters are very witty and produce funny and newsy letters, so I took them as my model. In an earnest effort to provide some fun for our Christmas card recipients, I would try to write a funny letter that avoided sounding pompous or cloying. That is not as easy as it sounds. If I wrote about a child’s accomplishment, I tried to balance it with a report of the latest natural disaster or major household system failure we had endured during the year. As I read over past letters, I am amazed at how many times our basement has flooded. Well, maybe not. Our house is situated on top of marine clay, after all.

This year I guess the big event to report was the blizzard back in February, which did some damage to one of our holly trees and our big boxwood, but not much else.  This has actually been a year when some of the biggest news was genealogy-related - well, at least I think it is the biggest news.
[Originally posted in 2009.]
Posted by Greta Koehl at 3:06 AM