The inspiration for this story was provided by “The Pink Bowl” at Karen's Ancestor Soup.


It is amazing what emotions can be inspired by a simple piece of crockery.

So you resign yourself to having one bowl and three coffee cups with green flowers and the rest of the dishes in the set with a single red stripe. The three coffee cups died the death cheap dishes often meet, but the flower bowl soldiers on. 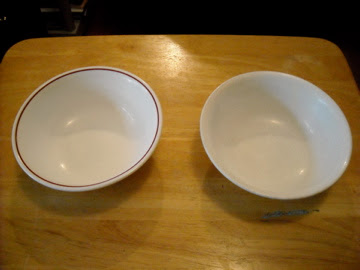 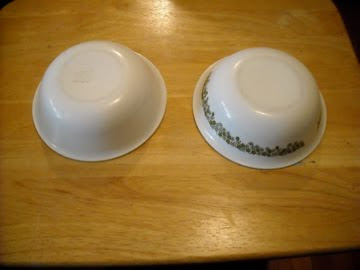 One bowl has a red stripe at the top, the other green flowers at the bottom – a huge difference

It’s not as though most of our non-holiday dishes aren’t odds and ends, anyway. There are two Mickey Mouse tumblers picked up at a dollar store whose bouncy “old” Mickey has long since faded to ghostly outlines from repeated washings in the dishwater. There is my old chipped coffee cup that has always been one of my favorite gifts from my mother. A very nice, solid off-white dessert plate from a neighbor who sent over a piece of cake and then moved before we had a chance to return the dish. A knife that belonged to an old boyfriend’s mother; it has the initial of her maiden name.

The flower bowl, perhaps by virtue of its “uniqueness,” at least in the eyes of my daughters when they were very young, had a status enjoyed by few other household items or even toys in our home.

It was the dish to have at breakfast, lunch, and dinner. The arguments over it started when my younger daughter was barely old enough to speak in full sentences, let alone have the judgment or patience to be able to wait for her turn to use it. And there was often confusion over whose turn it was. If Mom had served lunch, how would Dad know at dinner who had last eaten from the coveted dish? And if Little Sister was demanding and whiny, Big Sister was sneaky.

One day the usual argument erupted. It had not been a good day. Both daughters had long since used up all of their good behavior credits and gone deep into debt at Mom’s Bank of Good Will.

“You had it this morning. It’s my turn.”

One double grab for it, an overturned milk glass, and a high, piercing wail later, Mom was at the table with eyes glaring and mouth pursed into that grim line that meant only trouble and sorrow for all concerned.

I let silence fill the air for several seconds as my daughters turned to look at me with wide, alarmed eyes.

And then I let loose. On only one other occasion has the Mom Screech ever been so loud and so long. (It was in the car, after a long day, with two mindlessly arguing children. Oh, so you’ve been there, too.)

Only one lucid sentence was among the outburst of tired, mindless fury: “I am putting Flower Bowl away in the attic, and neither one of you will ever get to eat from it again.”

At the end of it, it was not the “reasonable” older child who broke the second long stretch of silence following this tirade, but the daughter who I thought would never emerge from irrational toddlerhood:

The ensuing sound that resembled air escaping from a balloon was my indignation evaporating. I put the bowl up in the cupboard and cleaned up the milk, with the girls’ help. The next day the flower bowl was out again at breakfast and resumed its daily routine of being passed back and forth between the daughters from meal to meal.

It was sometime after my older daughter started middle school that the carefully kept schedule gradually faded away, though I noticed that whichever daughter set the table for dinner usually gave herself the honors.

And these days, when I put up the dishes from the dishwasher as my last chore in the evening before going to bed, I put the flower bowl at the top of the stack of bowls.

Because tomorrow morning I will take it out and have my cereal in it.
Posted by Greta Koehl at 1:15 AM