Advent Calendar Day 9: Why We Will Never Have a Conventional Crèche

The theme for today is “Grab Bag” – as in “anything you want” – but grab bag made me think of hodge podge. And a hodge podge is definitely what many of our indoor decorations are, including our crèche scene.

This began in my childhood. I remember mostly the figurines for the manger scene. For one thing, they were of different sizes: for some reason, the Three Wise Men were much larger than the Holy Family and the shepherds; obviously, there were originally at least two totally different sets. And the angels must have simply been collected and added individually, as they were ceramic figures of various styles, whereas the other figurines appeared to have been made of wood with a waxy paint covering.

And there were elephants in the manger. The two pretty gray ceramic elephants that had been a present for my fifth birthday. (I’m not sure why someone would give ceramic figures to a five-year-old – I remember them coming from an older couple who were friends of my parents – but I thought they were awesome.) Since we didn’t have any camels, I figured the Wise Men must have ridden them to Bethlehem and then parked them in the manger. Of course, two of the Wise Men would have to have ridden on one elephant, or maybe one walked.

Now my family has a set of figurines, but no manger or any setting in which to put them. The smart thing would be to buy a completely new set, but that’s not our way. They belonged to my husband’s parents, so we have made sporadic efforts to find the other pieces. Nothing matches. We’ll have to make our own.

I’m thinking Lincoln Logs. Or perhaps even Legos, because we have a lot of those. It will be sort of a mixed media kind of thing.

Since my childhood crèche set, along with almost everything else we owned, did not survive our numerous moves, I cannot include a picture of it here. And my in-laws’ figurines are up in the attic.

So I’m including pictures of other items that have evolved into Christmas scene decorations. The first pictures shows Russian/Eastern Europen tree decorations and similar carved wooden figures we have collected over the years, and the second picture shows a set of Russian dolls, most of which were Christmas presents. They actually stay out all the time. Nothing like having a little touch of Christmas all year round. 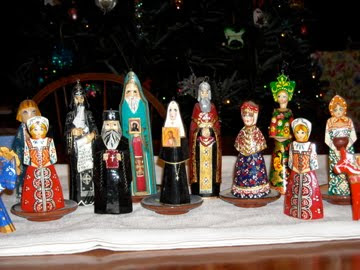 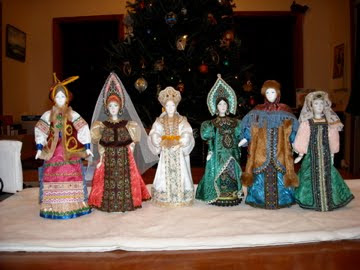