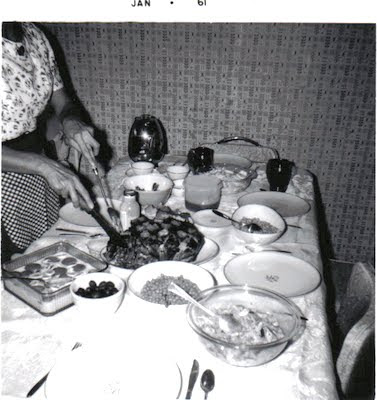 (Reposted from last year's Advent Calendar of Christmas Memories.)
I don’t remember a great deal about our Christmas dinners when I was a child, but fortunately I found a picture of one of those dinners in one of my albums of old photos.

So now I’d like to do a little bit of “photo detectiving” using the clues in the picture to reconstruct one of our Christmas dinners.

Not much of a challenge guessing which Christmas: the date – January 61 – means that this was taken at Christmas in 1960.

There are at least two items in this picture that have been discussed in previous blog posts: in the lower left is the infamous banana pudding that starred in Grandma Moore, Banana Pudding, and the Telephone: An Evening of Terror (well, not the actual pudding that she ate, but you know what I mean), and the table is set (I think) with the China that my Uncle Bill brought back to my mother from his Navy tour in the Pacific that was mentioned in Memory Monday: Our Edsel.

The ham is the usual traditional meat with pineapple. That dish in the lower right corner may be ambrosia salad, and I believe the round dish toward the back contains yams with marshmallows, which I detested. The other dishes appear to be the usual vegetables plus olives, which all of us loved. Finally, there is the ever-present coffee which my father could not live without.

(In the post for Advent Calendar Day 24: Christmas Eve, I will describe my family’s current tradition of Holy Supper.)
Posted by Greta Koehl at 5:11 AM