Music plays a big part in my family’s celebration of Christmas. When I was growing up, this was not so much the case. We heard Christmas music on the radio, on television, and I remember singing Christmas carols in school, but I don’t think we had any records of Christmas music. The one exception I can think of was that I asked for a full recording of The Nutcracker for my birthday when I was around 14. That set of records just about got played to death.

Now we have an entire section of our music library devoted to Christmas music. A lot of people get tired of Christmas music after too much exposure, but we try to avoid overload by bringing as much variety as possible to the selections we listen to. Television and radio programs tend to replay a limited set of carols over and over, though some stations are a little more adventurous (reason #48 on the list of reasons for saving our classical music radio stations). 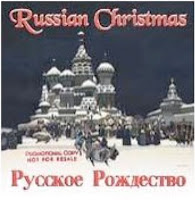 Some of our favorite Christmas music consists of Eastern European hymns and carols. Here are a couple of my favorite collections, Russian Christmas by the Theodorovskaya Mother of God Icon Church Choir and Christmas Hymns by the Seminary Choir of Blessed Theodore Romzha Academy of Uzhgorod.


This year my husband discovered the group you see below, the Sirin Chorus from Russia. I have been listening to their videos on YouTube, and you can also find their music on iTunes.


We also attend the local Christmas Revels in Washington most years. We love all the shows, but our favorites have tended toward the more ethnically-oriented themes: the Northern-themed To Drive the Dark Away (Karelian (Finnish, Lapp, and Russian), Norse, and Swedish), Roads of the Roma, and last year’s French Canadian Revels.


In addition to the Eastern Christmas liturgies we have on tape and CD there have been many classical Christmas works for both liturgical and concert settings that have made their way into our collection. The following is a fast-paced Hallelujah Chorus from Handel’s Messiah:


Other favorites are carols played on the hammered dulcimer. "The Zither Carol," as played by Joemy Wilson on the dulcimer on Gifts – Traditional Christmas Music, Vol II, has been known to set me atwirlin’ around the room (when no one is watching, of course). And there are many, many more odds and ends of Christmas music we love: music box carols, shapenote carols, Cajun and Zydeco Christmas songs, you name it.


So in this post, "avoiding overload" does not mean reducing the amount of Christmas music, but rather increasing the variety. Because anything worth doing is worth doing to excess. In fact, writing about all of this and looking up Christmas music on Youtube has put me in the mood for … more Christmas music. Wonder what I can find on iTunes?
Posted by Greta Koehl at 3:11 AM