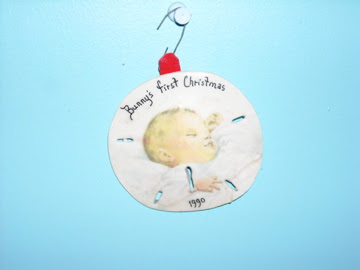 There have been several Advent Calendar posts by GeneaBloggers in which they describe their obsession with/passion for Christmas tree ornaments. I’m another one of those ornament fanatics.

As you can tell from the Christmas Tree post below, when I was a child, there was more tinsel than there were ornaments on our tree; the few ornaments appear to be mostly Christmas balls.

In college I was given some ornaments made by a friend’s mother, and that ignited my passion for all different kinds of ornaments, including handcrafted ones. Many ornaments have been added since then; no effort was made to have ornaments that "match" or "go together." They come in all different colors, have many different themes, and are made of many different materials. No attempts have ever been made to be tasteful. Just bright, shiny, and colorful.

Some of my favorite ornaments were a few I bought when I was a graduate student in Cambridge, Massachusetts. They were part of a set made of cookie dough on the “12 Days of Christmas” theme. These were very well executed and were painted in vivid colors, which made them quite striking on the tree. I bought about three or four, and now only two remain: the partridge in a pear tree and a lord a-leaping, who resembles a Cossack. Unfortunately he is short part of a leg, because one year someone, not me, did not pack up the ornaments very well. I have always regretted not buying the entire set, but then I was a poor college student. If anyone is familiar with this set of ornaments and knows where I can get the molds and instructions for it, I’d be eternally grateful.

At the top is one of my all-time favorite ornaments. Our beloved Donna bought this painted sand-dollar ornament for us the year she started babysitting my older daughter. She saw it at a craft show or store somewhere and thought it resembled our daughter so much that she just had to get it. I cannot remember whether she painted the inscription on it herself or had the artist paint it.

Below is one of the ornaments painted by my friend’s mother that started this whole obsession. I think it is supposed to be a downy woodpecker. As time permits I may feature other favorite ornaments – for you other ornament fanatics out there, of course. 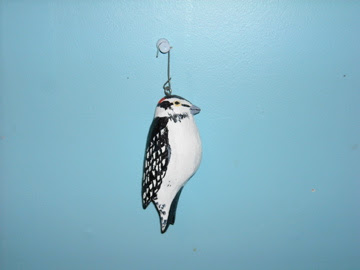 My original intention was to change the ornaments featured in this post from year to year. However, I think I'll just add ornaments until the post becomes "The Monster Christmas Tree Ornament Post." 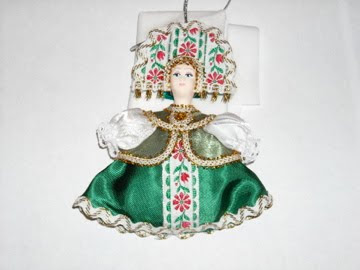 There are certain themes that appear often among my ornaments. The ornament above illustrates one of those themes: Russian and Eastern European ornaments. We have three different ethnic costumed ornaments of the type that you see here. 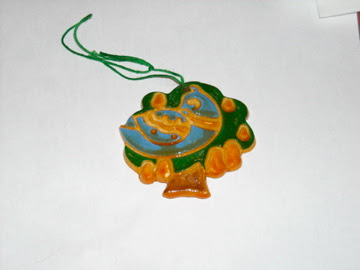 This is the only remaining intact ornament from the set of cookie dough ornaments I described above. It is supposed to be a partridge in a pear tree. 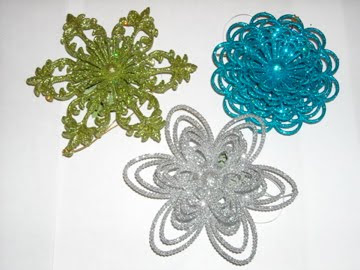 Because I already have more ornaments than I can fit on a tree, I have not bought any new ornaments for about five years. Yesterday I started my Christmas shopping and was looking for stocking stuffers at World Market when these caught my eye. I couldn't resist them - because they were ... sparkly.
Posted by Greta Koehl at 2:07 AM