This is a topic with which I am somewhat familiar, since yesterday was the “big day” for me.

If my birthday falling before Christmas wasn’t enough, my parents’ anniversary was three days after Christmas, on December 28. It seemed that they were constantly going to parties from Christmas to New Year’s. And I have a daughter with an early January birthday that coincides with Orthodox Christmas. We never take our Christmas tree down until after her birthday.

So what is it like to have a December birthday? It would be interesting to ask this question of some of my ancestors who were born in December. A search of the relatives that have so far been entered in my Reunion genealogy program revealed quite a few December birthdays. There are two first cousins and two first cousins once removed. And there were a couple of direct ancestors: my great-great grandfather Hiram Carroll Brinlee Sr. (25 December 1808) and my great grandfather Harlston Perrin Moore (4 December 1845). Finding H. P. Moore’s date of birth on his death certificate was especially delightful; he was my first “discovery” so he is kind of a favorite.

What did Hiram and Harlston do to celebrate their birthdays? I do not know, but I imagine that it was not very elaborate; they were farmers and not especially rich ones. And if I am ever tempted to feel sorry for myself for having a December birthday, I should certainly keep my ancestors in mind.

The thing is, for me, the December birthday has almost never felt like much of a burden or loss. For my parents, however – that was probably another matter. This did not occur to me when I was younger. The first time I heard the sentence, “This present has to be both for your birthday and for Christmas,” I felt a little bit of disappointment, as though I was being cheated out of something. Maybe the second time, too. But it started to dawn on me that were my birthday and Christmas not so close together, perhaps I would not be receiving these presents at all. As I grew older, the sigh and the eye-roll when mention was made of December birthdays were pretty much an automatic response rather than a deeply felt indignation.

And you know what? In college, early December through early January was pretty much one long party. My birthday would be celebrated right before everyone went home for Christmas vacation, then at home with my mother, then with my Texas friends, and finally back at college with the friends who missed the first party. There was never any real holiday letdown.

I hope Hiram and Harlston had at least a few “very merry birthdays.” 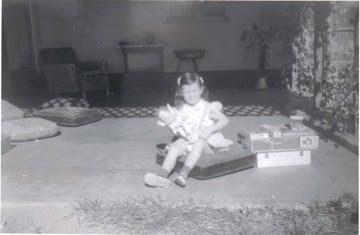 A picture made following my one and only childhood birthday party: there probably would have been no Tiny Tears for me without the December birthday
Posted by Greta Koehl at 6:48 AM