What My Ancestors Did for Entertainment, or: Things You Don’t Want to Read About Your Great-Grandfather

Lawsuits. They loved lawsuits. Or at least the Floyds did. Or at least they sued one another, and other people, a lot. Why do something so much if you don’t derive some sort of pleasure from it? 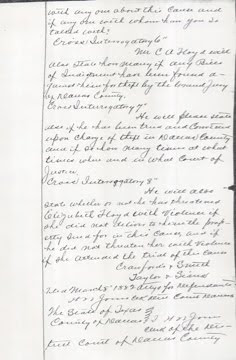 “Mr. C. A. Floyd will please state…”
It must have come from the Floyds’ love of drama; many members of this family are known to have been “high-tempered” or “high-strung.” (Not me, though – my hair-trigger temper comes from the Brinlees.)

After my great-great grandfather George Floyd’s death, my great-grandfather Charles A. Floyd sued his stepmother Elizabeth Floyd for taking possession of a parcel of land that he felt was rightfully his. The court case dragged on for several years and apparently got quite heated.

Things you don’t want to read about in the cross-interrogation of your great-grandfather:

“It was attempted to impeach my veracity and [reputation], but it ignominiously failed. I have a list of one hundred and twenty of the names of some of the best citizens in my neighborhood – good men who live immediately around me, sustaining my character, and impeaching those four who are my bitterest enemies – who tried to impeach my veracity.”

[Charles’ reply appears to address the question, though that “four of my bitterest enemies” part is disturbing in a paranoid kind of way (shades of "the mess boys...").]

Mr. C. A. Floyd will also state how many if any Bills of Indictment have been found against him for theft by the Grand Jury of Dallas County.”

“There are one or two. The Court and Juries decided that they were false, and they were not sustained.”

"He will please state also if he has been tried and convicted upon charge of theft in Dallas County and if so how many times at what times where and in what court of Justice.”

“I never was convicted on any charge at any time or in any place.”

[But you sure were tried a lot of times.]

“I never even thought of making any threats against Elizabeth Floyd at any time, on any account.”

[Never even thought of it? Just a teeny bit?]

And Charles gave the following reply in response to interrogation about not suing his father George Floyd when the latter remained on a parcel of land that was included in the area partitioned among his sons:

“I did not take possession of said twenty-five acres above-mentioned because my father refused to give it up, and I did not wish to have a law suit with my father, so I humored him.

[Didn’t want to sue his father? Um … then why did he and his brothers do that very thing right after their widowed father married a much younger woman following their mother’s death?]

And my cousin just e-mailed me with the wonderful news that she has 230 more pages of court documents to send me! Maybe those will have a clue as to who Charles A. Floyd’s “four bitterest enemies” were.

[The above excerpts were taken from the Dallas County District Court Case Papers for Case No. 4321, C.A. & A. E. Floyd vs Elizabeth Floyd et al, which my cousin Eunice kindly printed out from microfilm at the Dallas Public Library.]
Posted by Greta Koehl at 7:28 AM