Post-conference letdown. I did not experience it. Because today, 15 May, was a perfect day.

Today we left Charleston and headed toward Orangeburg to meet my second cousin once removed, Rebecca, and her husband Danny.

I am so proud to be related to these people, both genetically and through marriage. We got a running start in exchanging information, and didn’t let up the pace for two and a half hours. Rebecca and I did a “fast talking” data swap: family stories, what we had found in research, and as much incidental information as we could pack in between all of that. Stu and Danny talked about their areas of interest. Our (Koehl) daughters observed and laughed. Daughter #1 later confided to me, “Mom, you and Rebecca have the exact same body language; it’s so funny to watch the two of you together.”

Rebecca is a first-rate researcher and brought a pile of copied documents with her to give to me. Prior to becoming really active in genealogical research, she obtained some bootcamp-intensity experience in going through courthouse records, and the stuff she had shows it. My friends, she brought me a goldmine. Not only lots of records, but also several family reminiscences. This branch of the family, the last one I found in that exciting first year of research, is really starting to come alive for me. I am so excited about the prospect of having Rebecca to exchange information with. I was initially disappointed when, after I found this branch of the family, I saw that it has been well researched. But Rebecca and I have some ideas on some of the broken off branches....

After saying farewell to Rebecca and Danny, we headed for Greenville. As we approached Main Street and familiar landmarks came into view, I realized that I was smiling and could not stop. I roused the girls from their slumber and started to point things out: “Look, here is Main Street; see how the trees shade it over?” It was the last day of Greenville’s annual art festival, Artisphere, and we could see a long line of tents along the street near our hotel.

Right after we had checked in and checked out our room, we headed down the stairs from the hotel to the Reedy River below and Falls Park. It was as beautiful as I remembered it. I had hoped that the girls would like Greenville and turned around to see their expressions: they were as enchanted as Stu and I had been on our first visit! We stood on Liberty Bridge, a long, curved pedestrian suspension bridge. At one point we watched a pair of jugglers on the rocks in the river below juggle and toss pins to one another (some landed in the river, but were confined to a small pool between rocks).

We walked over to the art festival, visited some of the booths, and spoke to craftsmen and artists from all over the United States. We checked out a bit more of the park and then walked down Main Street toward the far end to eat at our favorite Japanese restaurant in Greenville. The food was as good as we remembered it. Daughter #2 stated that she wants to live in Greenville some day. On the way back we spotted three of the legendary little bronze mice of Greenville that can be found along Main Street if you look carefully.

After dinner we showed the girls Linky Stone Park, the children’s park under the overpass that we visited last time, and they were enthralled. We spent a good bit of time playing the musical instruments (bells, percussion, and an instrument made with PVC pipes (difficult to describe, but there is a small round opening in the top of each one, and if you quickly pop your hand on the top of it, it will produce the musical note with which each pipe is labeled).

There were still many people out walking and enjoying the fountains: families with little kids who splashed through street-level fountains, artists, bicyclists, and lots of people with their pets, including a guy walking his rabbit. I stopped to talk with him for a while to see how his rabbit takes to all of the people (quite well) and told him about our daughters’ second-grade teacher and the beloved rabbit she often brought to the classroom with her.  He admitted that he has really spoiled his beloved rabbit, but I noted that she is certainly well behaved in public.

Here are a few pictures from our first day in Greenville: 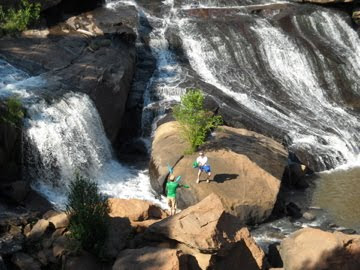 Jugglers on the Reedy River 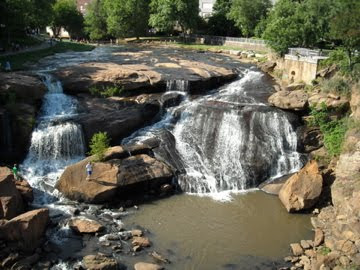 Some of the falls on the Reedy River 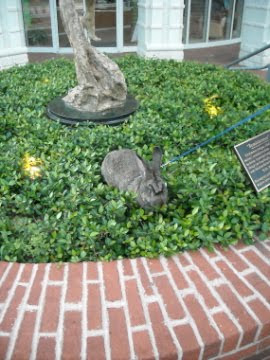 Rabbit out for a walk 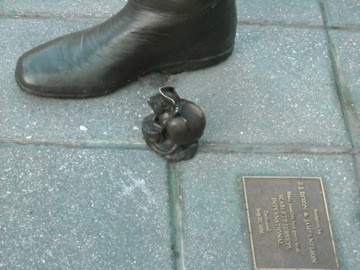 Mouse with hat next to statue of Nathaniel Greene 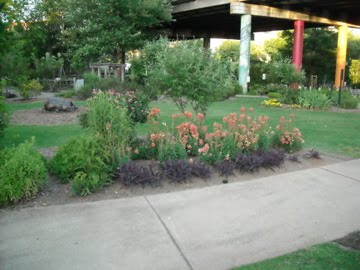 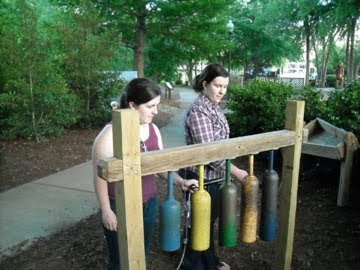 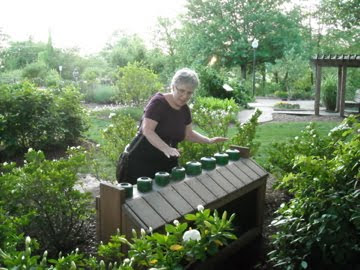 [This was written yesterday but not posted until today.]
Posted by Greta Koehl at 2:31 PM