My little corner of Falls Church is very unprepossessing on the surface, to say the least: from uninspired World War II tract housing interspersed with slightly ramshackle colonials and formerly charming A-frames that threaten to disappear under the weight of overly ambitious second-floor additions to odd little shops with anachronistic architecture and weathered signs advertising German food, vacuum cleaners, and exotic birds - this is not the wealthy and stylish City of Falls Church, but rather its poorer, more blue-collar neighbor right across the highway in Fairfax County. For every new or renovated house that pops up as a token of near-prosperity, another slides into down-at-the-heels neglect, like a frayed slip that insists on peeking out from under a new dress.

In short, the appearance of our neighborhood is unglamorous and mostly ordinary. Contained within this neighborhood, however, is a community rich in history, full of plenty of things to interest the genealogist and the Graveyard Rabbit, and sitting atop an unusual geological feature that has played a role in the neighborhood's history and can still be seen in some of the neighborhood’s landmarks and homes today. This is Tinner Hill.

I cannot do justice to the history of Tinner Hill in a single article, but I can summarize it and point readers to further sources of information.

History: In 1915, in reaction to the passage of a local ordinance mandating residential segregation, two prominent residents of Tinner Hill - Joseph Tinner, a Falls Church stonemason, and Dr. Edwin Bancroft Henderson, an educator – established the Colored Citizens Protective League (CCPL) and organized a campaign of opposition to the segregation ordinance. In 1918 the CCPL was accepted as a local affiliate of the NAACP and became the first rural branch of the NAACP. The results became part of American civil rights history; as explained on the “African American Heritage Virginia” webpage (http://www.aaheritageva.org/search/sites.php?site_id=88): “The sustained pressure from African-American citizens prevented the Falls Church town council from enforcing the segregation ordinance, and in 1917 the U.S. Supreme Court nullified state laws making residential segregation legal.”

Joseph Tinner, E. B. Henderson, their families, and a number of other Tinner Hill residents were people of tremendous accomplishment and courage. Again, I cannot do full justice to them here, and highly recommend the sources listed below, but I would like to give a special mention to Dr. Henderson’s wife, Mary Ellen Meriwether Henderson. Her mother, Mary Louise Robinson, was one of the first African American women to graduate from college (Oberlin) in this country, her father was a lawyer and a builder, and the family owned several businesses in the Falls Church community. Mary Ellen, like her mother and three sisters, became a teacher and was eventually the principal of what was called the “Colored School.” The school was too small, had no plumbing, running water, or heat, and few school supplies. Her efforts to get a proper school building with adequate facilities and supplies included a study she did to illustrate the disparity between black and white schools that became a basis and model for efforts to rectify inequality in school facilities and services throughout the state. The middle school in Falls Church was renamed in her honor several years ago. 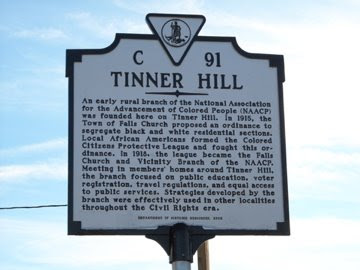 The following are websites with information on the history of Tinner Hill and its residents:

A webpage on Tinner Hill by the College of Architecture and Urban Studies of Virginia Tech (http://www.caus.vt.edu/CAUS/CAUSNews/more/tinner.asp)

There is also a book on the history of Falls Church which includes ports of several well-known African-American residents of the area: Falls Church: Fence and Fireside, by Melvin Lee Steadman, Jr., published in 1964. (This is available on Google Books.)

Graveyards: On one of my Graveyard Rabbit blogs, The Graveyard Rabbit of Northern Virginia, I have made a start on recording gravestone images from two nearby cemeteries which belong to churches that have played important roles in the history of the Tinner Hill community: Galloway United Methodist Church cemetery (shown below) and the cemetery of the Second Baptist Church of Falls Church. Many members of the Tinner and Henderson families and other Tinner Hill residents are buried in these cemeteries. 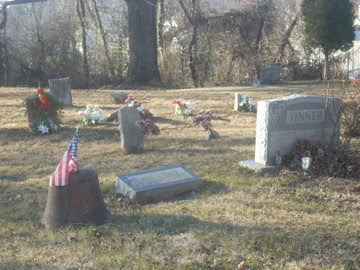 Granite: I know, I know, granite, fireplaces – what does that have to do with all of these important historical events? As it turns out (and you will see if you take a look at the first website listed above), quite a lot. First of all, remember that Joseph Tinner was a stonemason. He and his descendants quarried the pink granite that can be found at the base of Tinner Hill. The quarry has now been paved over, though there is still a nominal business dealing in quarried stone products at the location.

The pink granite in question was tested in the 1970s and found to be trondhjemite, a variety of granodiorite that is rich in quartz and contains little or no alkali feldspar. This beautiful, high-quality granite is uncommon; other known veins are located in Norway, Alaska, and the Andes.

According to the History of Tinner Hill website, “The Tinners quarried the rock and cut it into blocks. They built buildings and foundations of homes from the granite. The 1922 Falls Church Bank and the Texaco Station at the corners of Broad and Washington Streets were excellent examples. Unfortunately, both were demolished in the 1970s. The only remaining work of the Tinners is in building foundations, fireplaces, porches and chimneys of homes in Falls Church.” (Pictures of the Falls Church Bank and Texaco Station can be found on the History of Tinner Hill website.)

Which brings us to my fireplace, shown in the photograph at the bottom of this article. If you compare it to the photograph of a fireplace shown on the History of Tinner Hill website, the two appear to be almost identical. Our house was built in 1930, so I am guessing that one of the Tinners built our fireplace (Joseph Tinner, unfortunately, died an early death in 1928). I certainly hope that is the case and plan to do some research on the construction of our house.

There was an interesting outcome to the destruction of the stone landmarks in Falls Church; some of the stones eventually went into the building of the Tinner Hill Monument (pictured below), also known as the Tinner Hill Arch (Joseph Tinner’s specialty was building arches). As described on the History of Tinner Hill website: “The stone used for this arch was gathered over a two year period from properties around Falls Church. When the stone buildings of Falls Church were destroyed in the mid-20th century, families gathered the remaining stone for their yards to build walls. Over 30 property owners of Falls Church kindly donated back these stones to be used in the monument.” The monument is 15 feet tall and honors the men and women of Tinner Hill who established the first rural branch of the NAACP. Another interesting side story in this connection is that Joseph Tinner’s finest arch was considered to have been one he built at Oakwood Cemetery, but this arch was destroyed in 1964 to make way for a car dealership. Oakwood Cemetery is another of the cemeteries featured in The Graveyard Rabbit of Northern Virginia, and I had not been aware of this connection. I hope to find a picture of this arch. 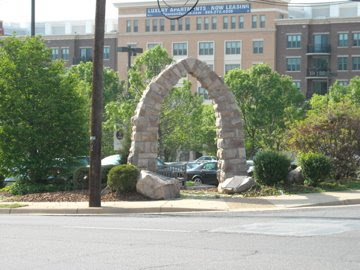 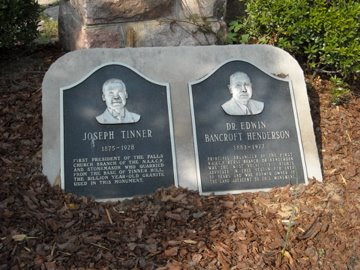 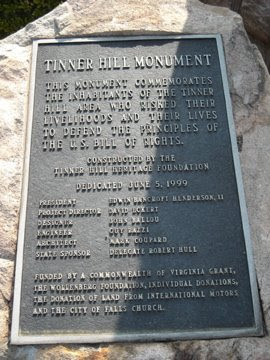 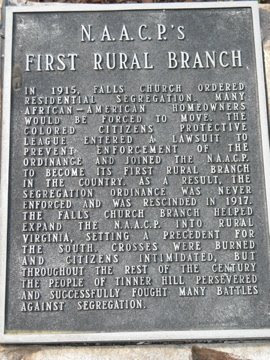 Although the arch and the historic Henderson house are located in Falls Church City, most of the surviving landmarks connected with the Tinner Hill community are located on the Fairfax County Side. The James Lee School (now the James Lee Community Center), where Mary Ellen Henderson taught at one time, was named for James Lee, a local black landowner, as was the James Lee Community, which includes Tinner Hill, Baptist Hill (site of the Second Baptist Church and cemetery), and Southgate Subdivision. These sites and Galloway Methodist Church are located along Annandale Road between Arlington Boulevard and Lee Highway. The History of Tinner Hill website notes that the presence of these properties helps to make it possible "to preserve vernacular places not grand in stature but immensely important in the evolution of this freedom-based democracy.” For this I say “Amen!”; this has helped to keep our community from being turned into another bland development with no personality, a place that has completely lost all sense of its own history. There are a number of interesting, twisting little streets that branch off Annandale Road; some of them are actually narrow alleyways lined by a closely packed patchwork of houses. Many of these houses are of an unusual but not unattractive blend of “make-do” architecture (i.e., use what’s available, even if it doesn’t all match perfectly in style); my own house, dating as it does to the Depression era, has a few of those features. 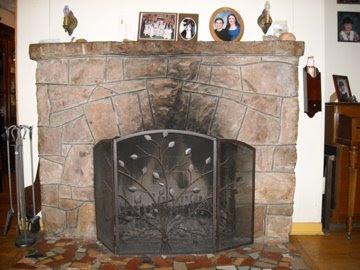 Submitted for the 71st Edition of the Carnival of Genealogy.
Posted by Greta Koehl at 3:22 PM