Smile for the Camera: Wedding Belles

The word prompt for the 14th Edition of Smile For The Camera is Wedding Belles. Historically, couples married in the month of June to honor Juno, the Roman goddess of marriage. Others did it to time conception so births wouldn't interfere with harvest work. And brides in the 15th century chose to marry in June because it coincided with their "annual bath" - that's right - ensuring a relatively sweet-smelling honeymoon. Show us a photograph of a wedding, a wedding party, a bride, a groom, the reception, or even the honeymoon. Bring them to the carnival and share. Admission is free with every photograph!

An embarrassing fact about my collection of old family photos – there are very few wedding pictures. The few exceptions are: some recent pictures of my husband’s niece’s wedding, a worn old (as in 58 years old) newspaper clipping with a picture of one of my cousins in her wedding dress, about a dozen pictures of my own wedding taken and assembled into a small photo album by my in-laws, and two scans of weddings of distant cousins taken in 1904 and 1905 and sent to me by “genealogy cousins.” I chose to feature for this edition of Smile for the Camera the pictures from the early 20th century weddings and a couple of the photographs from my own wedding. 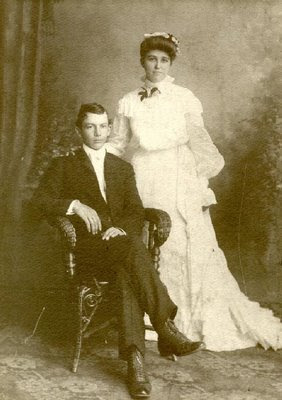 This picture is owned by my third cousin JoAnn S., who generously scanned it and sent it to me. The bride is Nora Kate Cartee (1887-1968), daughter of Anna Jerusha Moore, sister of my great-grandfather Harlston Perrin Moore. The groom is John Andrew Jolly (1880-1910), son of James Albert Jolly and Mary Bolt. Nora Kate and John were married on 30 March 1904 in Anderson County, South Carolina. They had four children together before John’s tragic death in 1910. Many years later Nora Kate married Arthur Walton Dalrymple, who is also a distant relative of mine. 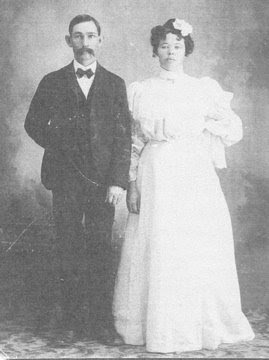 This photograph is owned by my second cousin Edna Rae S., who was kind enough to send me a scan of it. The bride and groom in this picture are Dovie Edna McDonald (1881-1970), daughter of John Jerman McDonald and Mary Elizabeth Wallace, and John Ewing Brinlee (b. 1875), son of Hiram Carroll Brinlee, Jr. and Eliza Caroline “Disey” Boone; he was one of my grandfather Lawrence Carroll Brinlee’s older half-brothers. Dovie and John were married on 24 September 1905.

And here are two pictures from the wedding described in Getting Married at Dr. Maiden’s House. 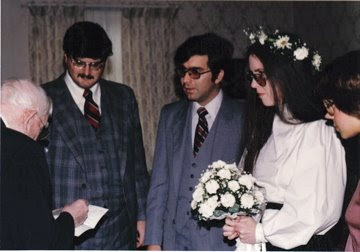 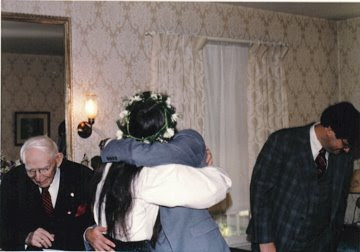 Marrying my honey of 7 years and staying with him for 27 more years (and counting)
-----Priceless
Posted by Greta Koehl at 5:23 PM

Email ThisBlogThis!Share to TwitterShare to FacebookShare to Pinterest
Labels: Smile for the Camera