I used to think that the origin of my love of gardening was a little vegetable garden that my father set up for me to tend when I was about 7 or 8 years old; it had a tomato plant or two and a pepper plant. The garden died; I had failed to water it.

The true inspiration for my love of plants, however, probably dated to a few years before this vegetable garden’s brief and pitiful existence. I believe it was my mother’s flower garden: not so much the cannas and geraniums bought at a nursery and carefully spaced in the beds in our front yard, but rather the flowers that grew all topsy-turvy, crawling over and around one another, in my mother’s “cutting” bed at the side of the house. Of these, the ones I remember best are the sweet peas my mother grew on a trellis. They seemed to run the entire gamut of pastel shades, and their fragrance was heavenly. It was the subtlety and delicacy of their fragrance which made it so wonderful. My mother would cut huge bouquets of sweet peas, and I still remember putting my entire face into a bouquet of these soft, delicious flowers. These flowers also played a role as part of the landscape of the imaginary world that our yard sometimes became, but at those times it was the curlicued tendrils of the vines that were the object of interest, because my playmates and I decided that they had magical powers.

After I grew up, home ownership was the final ingredient needed to reignite my love of plants and give it the space to develop. In the early years, our garden beds were almost equally divided between vegetables and flowers, minus a couple of beds devoted to herbs. As the trees grew and increased the proportion of our yard in shade, vegetable beds have mostly given way to flower beds. Most of the time, for all practical purposes, I was the sole gardener, though my husband would lend landscaping assistance. The exception was at Easter time, when my daughters’ Easter baskets would contain a couple of packets of seeds which we would plant when the weather would allow it. Forget-me-nots still pop up all over the yard as the lingering aftereffect of my younger daughter’s spectacular first experience with these tenacious little flowers.

However, it did not appear that my daughters’ love of plants went beyond admiration into the realm of the hard work and regular care that a successful garden requires. That is, until recently, when my older daughter returned from her freshman year of college. It turns out that she not only remembered our previously lush flower beds with great fondness, she had even bragged about them to her friends and, wonder of wonders, now wants to reclaim the former glory of our garden from the wilderness. For the past few weekends we have been cleaning up, pulling out, raking, sweeping, digging, and cutting. She has found all the old seed packets that still remain and has thrown these seeds into a couple of sunny beds that we have cleared out; patches of zinnia and cosmos sprouts testify that some of these venerable seeds are still viable.

The perimeter of a more orderly beauty gets pushed out a little farther each weekend and the tangled swamp on the other side gets a little smaller. On Saturday mornings we head out to the local farmers’ market to buy a handful of plants to put in beds or in pots on our deck. Among the Easter basket remains and retired toys in our basement there were also four bird feeders. Two are wooden ones made by my daughters in the Girl Scouts; one bop by a squirrel and most of the seeds spill out onto the ground. The other two are plastic tube feeders bought at the dollar store, and these are functioning spectacularly well so far.

It’s too bad that I cannot introduce my daughter to the mysterious allure of sweet peas, but Virginia is a swamp and cultivated sweet peas do not do well here. I’ll just have to consider adding some wild sweet pea vines to the many other weed vines that constantly threaten to reclaim our little patch in the wilderness.

Some of our daylilies 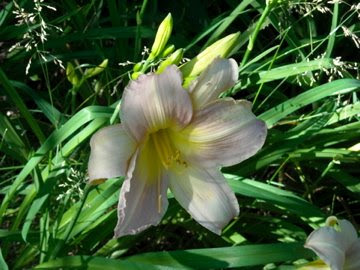 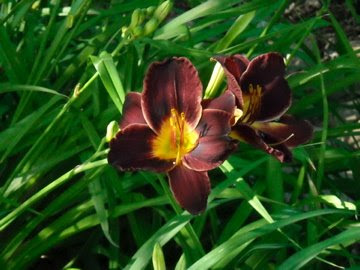 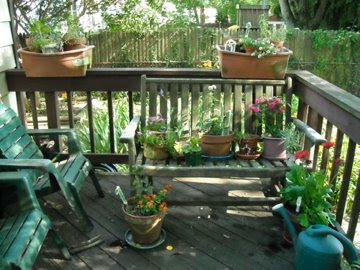