The word prompt for the 12th Edition of Smile For The Camera is A Noble Life. Show us a photograph of an ancestor, relative, or friend that is the embodiment of A Noble Life. A life that is worthy of those who came before and those who follow after. A Life filled with small but courageous acts; filled with love and honor. A simple life, an ordinary life, A Noble Life. Bring them to the carnival and share with us how you’ve honored them. Admission is free with every photograph! 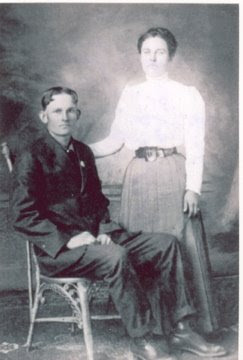 Clarence Edward Brinlee (b. 10 April 1892, d. 22 February 1980) lost his mother, Mary Ann Sims Brinlee, when he was eight years old and his father, James Edward Brinlee, when he was 15 years old. The 1910 census shows him living with his grandfather Hiram Brinlee Jr. and step-grandmother Lizzie Brinlee in Hunt County, Texas. Also living with this family was Hiram and Lizzie’s oldest son and my grandfather, Lawrence Carroll Brinlee, who would have been Clarence’s uncle but was almost a year younger than Clarence.

Clarence and Ethel were known among the Brinlees to have taken in and taken care of numerous relatives, both close and distant, who needed help. I do not know of anything dashing or exciting in their history, but I want to know them better, and one of my self-assigned research goals is to get in touch with some of their descendants and find out more about them. One of the things about family research that surprised and delighted me was how compelling the stories of ordinary but strong and decent people like Clarence and Ethel can be. I hope to have more of their story to share in the future!
Posted by Greta Koehl at 7:29 PM

Email ThisBlogThis!Share to TwitterShare to FacebookShare to Pinterest
Labels: Brinlee, Sims, Smile for the Camera