Easter Traditions in the Eastern Churches: The Easter Basket

The general logic behind the selection of foods that go into the Easter basket among Eastern Christians (Orthodox and Greek Catholics) in Europe is to include the items we have been abstaining from during the period of fasting. For the Eastern churches, this generally includes the following: meat, eggs, dairy products, fish with backbones, alcoholic beverages, and olive oil. These reflect foods that were considered “rich men’s food.” Thus, lobster is allowed, because in olden times it would have meant crayfish, which was a poor man’s food. It is encouraged to set aside the money saved by not purchasing these foods to be used for alms.

The Easter basket is thus filled with some fairly rich food: ham, sausage, pork, and an abundance of eggs: boiled eggs and egg-rich breads such as the Paska, the traditional slightly sweet Easter bread which is often decorated with strips of the dough in the form of braids and three-bar crosses. In this country items made of chocolate (eggs, bunnies, crosses, lambs, etc.) are frequently added to the basket.

After midnight liturgy in some Eastern churches, the baskets are taken to be blessed. In our church, the priests dip a brush into holy water and sprinkle the baskets and congregants (occasionally zapping one another in a sort of gentle “holy water fight”).

Another egg-rich item found in some baskets is the hrutka, or egg cheese. Like the Paska, it is slightly sweet . Below is the recipe I use:

Beat eggs. Heat milk in microwave until quite warm. Add about 1 cup milk to beaten eggs and stir well. Then add eggs to milk and stir well. Add salt, vanilla, and sugar to egg mixture. Start heating on high heat in microwave oven. Stir every 4-5 minutes until mixture begins to get thick. Continue cooking, stirring every few minutes until mixture gets very clumpy. (When a watery whey starts to separate out, the eggs and milk should be sufficiently cooked.) Pour into a cheesecloth bag or piece of cheesecloth. (I use slotted ladles to do this, which helps to start the process of draining.) Tie tightly, then press with spoon to remove excess liquid. Let hang several hours, or overnight. Refrigerate.

Below are some pictures of our Easter basket over the years. The second picture from the bottom shows a Paska (the candle symbolizes Christ as the Light of the World), and the bottom picture shows a row of Easter baskets getting blessed. 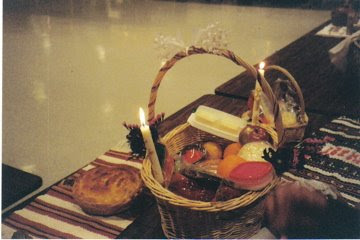 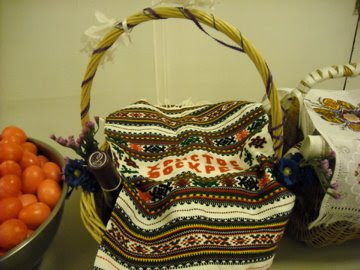 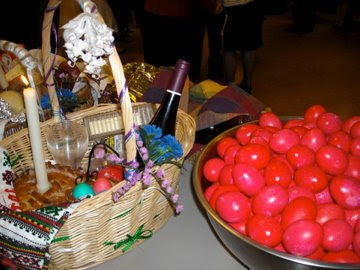 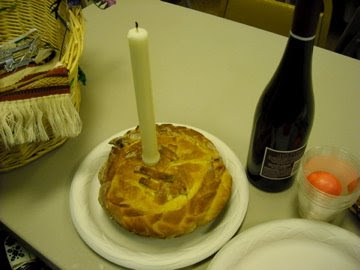 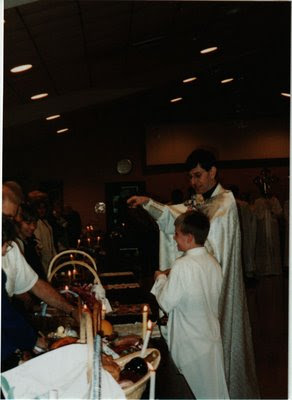