We have a much larger and more beautiful holly tree in the back yard. But it’s missing something.

No, that’s not right. The big holly tree is NOT missing anything. And that’s why it doesn’t bear much of a resemblance to my family tree as my research reveals it - because there are lots of gaps in my research.

So the poor holly tree out front is the more apt symbol. The winter before last, during Snowmageddon, the weight of the snow caused one of the three main branches to break off so that one side was left almost completely bare. It looks a bit better now, as though some of the twigs and small branches on the other two sides are trying to bend around and cover the bare branches out of modesty.

But it’s still a lopsided tree, and so is my family tree. 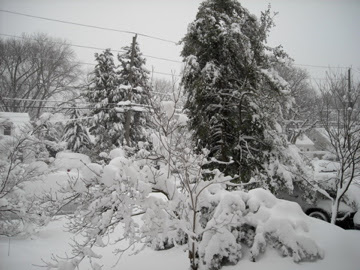 The Front Holly Tree, minus one branch which is flopped over and covered with snow, bottom right
The brick walls are awfully low in my family tree; there are a few really long branches, but for for many lines, “growth” stops with pretty recent ancestors. We’re not supposed to call them “brick walls,” so let’s call them “dead-end branches.”

This post turns out to be not just an excuse for milking the tree metaphor for all it’s worth. The listing of dead-end branches is basically an outline for where I want to focus my research. The only family missing in this list are the Lewises. I know my gggg-grandparents in this line - William Lewis and Mary John - but I am more interested in figuring out the list of children of my great-great-great grandparents Elisha Lewis and Rosannah Dalrymple Lewis, as well as the fates of the daughters of William and Mary Lewis: Rachel, Sarah, Mary, and Leah Lewis. You could say that this is a long but skinny branch.

Add a few intriguing gggg-grandparents into the mix, and that’s my research plan for the coming years. With names like Smith, Moore, and Lewis prominent in this list, this is not going to be a piece of cake. Or, to put it in more arboreal terms, it’s going to take one heck of a green thumb to get this tree to grow right. Ever tried to prune a holly tree or clean up the holly leaves that collect on the ground? Those pointy little leaves can be really nasty. But I won’t get discouraged. I want a tall, magnificent tree, covered with a thick mantle of dark green leaves. And lots of those little red berries would be nice, too. 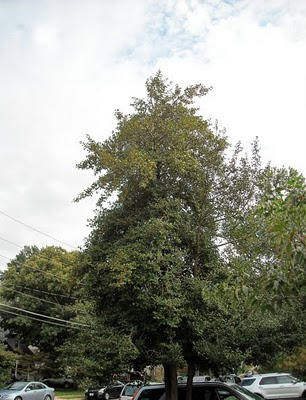 The Lopsided Holly Tree as it appears today
Submitted for the 110th edition of the Carnival of Genealogy, sponsored by Jasia’s Creative Gene.
Posted by Greta Koehl at 7:24 PM

Email ThisBlogThis!Share to TwitterShare to FacebookShare to Pinterest
Labels: Carnival of Genealogy