I remembered the words with which I had ended my series of posts on “Searching for Preston Moore”:

“That is the last I know of Preston E. Moore.

I doubt if I will ever learn his ultimate fate: when and where he actually died and is buried. Some day I hope to visit the area of the Nashville battlefield, which has not been preserved but does have a few roadside historical markers. Preston may have been buried in an unmarked grave somewhere nearby, or he may have made it partway home to South Carolina, desperately ill and fighting the bitter cold, before he died.

I think of Preston every Memorial Day and remember him often at other times.

His name will not be forgotten.”

Well, I can still say that his name will not be forgotten.

In the Affidavit of Absence of Defendant, Commodore Moore said on oath that Preston E. Moore “when last heard from resided in the state of Texas and was not settled down, and his address and his whereabouts is not known.” Texas! I remembered all the fruitless efforts my cousin Jo Ann and I had made to locate Preston in Texas.

I continued to scroll through the microfilm images:


At this point, after scrolling through and printing out more than 50 pages, I ran over to Paula and Carolyn with news of “the bombshell.” They were also amazed, both at the story and at what a windfall we were coming into.

More scrolling – as each image came up on the reader, it was as though another layer was being peeled off of my old image of the family and a new image was emerging.

The next pages to appear were the Order to Sell the Real Estate of W. S. Moore Deceased. I had always wondered why my great-grandfather Harlston Moore had left the farm in South Carolina and moved to Texas. What was the incentive? Was it that life was so hardscrabble in South Carolina? A map of Hopewell and Garvin Townships in Anderson County from 1877, the year that my great-grandparents moved to Texas, indicated that H. P. Moore owned the land: 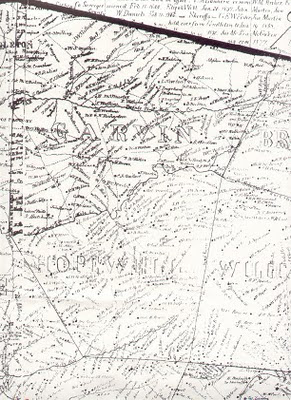 
Next came the Report of Sale:

“One tract of Land Containing (176) one hundred and seventy-six acres more or less which was bid off by P. H. Moore for the sum of (1480) Fourteen hundred and eighty Dollars he being at the time the highest and last bidder for the same. And upon his compliance with the terms of said sale I executed and delivered to him a deed of conveyance for the said tract of land, All of which is respectfully submitted Dec 5th 1873, Wm. McGukin, Sheriff.”

So my great-grandfather had placed the winning bid. But the next Report of Sale showed a less rosy picture:

The Order for Resale of the Real Estate of William S. Moore followed. Then the Mortgage of Real Estate, turned over by H. P. Moore to Wm. McGukin, and the document of delivery of the mortgage to the sheriff until payment of the penal sum of $2730. The date was 10 December 1874. More than three years had passed since the death of William Spencer Moore.

It was a story that had already been played out, yet it seemed to be taking place before my eyes. By this time, after squinting at and cranking and adjusting the many pages, it seemed as though the tale must be coming to its sorrowful end.

But there was more.