Timeline Portrait of Lizzie Smith: Stitching the Gaps Together

Up until the time when Lizzie Smith Bonner married my great-grandfather Hiram Carroll Brinlee, Jr., every single bit of information about her – every single date – is a guess and an estimate.

It starts with her birth. If you go to the entry for her tombstone at Findagrave, you will see that the date given in the transcription section is April 4, 1860, whereas if you look at her tombstone, the year of her birth is given as 1856.

I don’t believe either one. The first date comes from her obituary and the second may have appeared in a family Bible. The age given on her marriage license and the age indicated on the earliest census on which I have been able to find her (1910) contradict these dates and indicate something closer to 1868 or 1869; the 1920 census age is consistent with this. And the birth of her youngest child Cecil Odell in 1908 makes those early dates a real stretch.

Lizzie’s age starts creeping up on her Application for a Confederate Widow’s Pension and continues through the 1930 census to her death in 1958. The Findagrave entry gives Knoxville as the place of Lizzie’s birth; I would love for that information to be accurate, so that I would at least have a starting point for my research, but I don’t know whether or not I can trust that piece of data, either.

As indicated by the note shown below, Lizzie was probably not trying to inflate her age for the pension application but had genuinely forgotten how old she was: 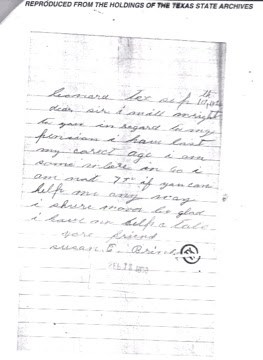 “leonard tex sep 10th, 1929
dear sir i will wright to yu in regard to my pension i have lost my corect age i am some where in 60 i am not 75 if you can help me any way i shure wood be glad i have no help a tall.
yore friend
susan E. Brinlee”

This uncertainty and confusion continues throughout her early life. You can see how often I have mulled this information over and run through the various permutations in two of my previous articles on Susan Elizabeth Smith “Lizzie” Bonner Brinlee: Lizzie Smith Timeline, which I will reproduce below for reference in this article, and Brickwall Workshops by the Fairfax Genealogical Society, which was a reproduction of the write-up I submitted to the brickwall workshop panel.

Based on a total of 24 Smith-tagged articles, you would think that I have covered Lizzie thoroughly enough; time to drop it for a while! But I will never feel I have done enough and I cannot drop it.

There are several bits of information about Lizzie that help keep this obsession alive. One is the date of her death: July 29, 1958. I was a little girl then. She was still alive when I was born – the only one of my great-grandparents who was – and yet she is the only brickwall great-grandparent.

The second piece of information that haunts me is this item, hidden among some online genealogies as a Post-It note submitted by a second cousin based on information she had heard from her grandmother (Cecil Odell Brinlee’s wife): Lizzie “was from Tennessee and had lived with a family that had taken her in to help work, where she washed dishes by standing on a bucket. Therefore, she had to have been fairly young.” This reveals an additional mystery for Lizzie: Why was she working out as a young child? Was she an orphan or a child of a very poor family?

The third item is merely a family rumor – that Lizzie was part Native American. It’s one item of family lore that I have always cherished and fervently hoped was true. But the genealogical myth-buster in me triumphed and after checking out the Dawes and Guion Miller Rolls with no success, I abandoned that avenue of research. However, at the Brick Wall Workshop sponsored by the Fairfax Genealogical Society that I attended, the first response I got was: What is she doing in Indian Territory in 1891? And especially with a name like Smith? Check those Rolls! So even though I had no success in finding her the first time around, there is a legitimate reason to suspect some Native American connection.

The timeline work for Lizzie has been particularly useful in following a possible lead on her first marriage (“to a Mr. Bonner” according to family researchers, probably based on her name as “Mrs. S. L. Bonner” on the marriage license with Hiram Brinlee). If she was born in 1868-69 and married at age 17 as indicated by the 1930 census, this would give a year of 1885-86 for her first marriage, and there is an 1886 Tennessee marriage record for a Lizzie Smith and a W. T. Banner (I have found no Banner families but did find Bonner families at the location given).

Some time between those years and Lizzie’s marriage to Hiram Brinlee, Mr. Bonner died. And Lizzie ended up in Indian Territory. Were the Bonners Sooners, or did her presence have something to do with Lizzie’s (possible) Native American background?

Between the first “known” date on the timeline, the date of Lizzie’s marriage to Hiram Brinlee, and her death in 1958, all the information falls into three categories: the births of her children, census information, and information provided on her pension application.

And between the birth of daughter Cordelia in 1895 and the birth of son Austin in 1904, there is a gaping hole right where the 1900 census should be. Oh, I have located where the family was, then – Britton Township in Oklahoma Territory – because Hiram, son Louis from his first marriage, and a hired hand are shown living there. But I can’t find Lizzie and the children anywhere else and I suspect they were actually living there, too. So my best hope for nice, juicy information on Lizzie’s month and year of birth is dashed. And one of the most tantalizing things is that, according to the 1910 census, Lizzie had had a total of seven children, of whom only four were living in 1910. Might one or two of those children have been alive in 1900 and have appeared on this census?

The gap in the early years, when Lizzie probably spent time working for another family, and the gap during which she probably gave birth to the children who died, haunt me the most. Why did her maiden name have to be Smith? Why didn’t she appear on the 1900 census? Why couldn’t someone have asked her more questions about her past when she was still alive? I am still trying to stitch those gaps together.


Lizzie with sons Odell, Austin, and Lawrence, sometime in the 1930s? (Courtesy of George B.)

4 April 1868: Birth of Susan Elizabeth “Lizzie” Smith in Tennessee (state from US Federal Censuses 1910, 1920, 1930 and Susan E. Brinlee’s Widow’s Application for Confederate Pension, day and month by hearsay from family Bible, now believed to have been burned, and year based on age reported on marriage license of H. C. Brinlee and Mrs. S. L. Bonner).

1885/1886: According to the 1930 census, Lizzie first married at the age of 17; I would guess this happened in Tennessee. [According to Tennessee marriage records, a W. T. Banner married a Lizzie Smith in October 1886 in McMinn County, Tennessee.]

29 January 1893: Son Lawrence Carroll Brinlee born in String Town, Atoka, Oklahoma (Paul’s Valley is given as his place of birth on his WWI Draft Registration Card).

25 June 1900: Hiram appears on the 1900 US Federal Census for Britton Township, Oklahoma County, Oklahoma Territory; Lizzie and the children may be living with him.

1902: The year Hiram and Lizzie may have moved from Oklahoma to Texas, as reported by Lizzie on her Confederate Widow’s Pension Application.

4 May 1910: Hiram and Lizzie appear on the US Federal Census for Justice Precinct 2, Hunt County, Texas.

30 January 1920: Hiram and Lizzie appear on the US Federal Census for Farris, Atoka Co., Oklahoma. Hiram had died on 20 January, but the census-taker must have been following the instructions, which indicated that “individuals alive on 1 January but deceased when the enumerator arrived were to be counted.”

10 Sep 1929: Lizzie writes a letter requesting assistance with her Pension application; the location is given as Leonard, Texas (Leonard is in Fannin County).

21 April 1930: Lizzie appears on the US Federal Census living with her son Austin in Fannin County, Texas.

29 July 1958: Lizzie dies in Plano, Collin County, Texas. She apparently had lived for some years with her youngest son, Cecil Odell, who signed the application for her mortuary warrant and her death certificate. Her death certificate indicates her stay in Plano as “several years.” 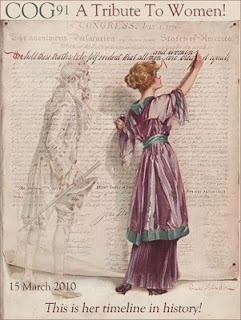 The above is submitted for the 91st Carnival of Genealogy, “A Tribute to Women!” March is women's history month and a great time to honor the women on our family trees. This is will be the 4th annual edition on this topic so we're going to change it up just a bit to keep it fresh... Write a biography about a woman on your family tree starting with a timeline of their life. Thank you to Jasia at Creative Gene for hosting and to footnoteMaven for the beautiful poster.
Posted by Greta Koehl at 2:43 PM