Smile for the Camera: School Days

The word prompt for the 16th Edition of Smile For The Camera is "School Days." It is September, historically the month when a new school year begins. We all have images of the days spent in school. The barefoot children gathered together with their teacher in front of the rural school your ancestors attended. Children at their desks, children at play in the school yard, and those obligatory school photographs - one for every year. Show us your family memories of school days. Admission is free with every photograph! 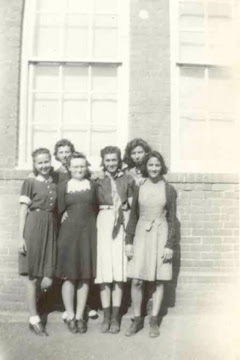 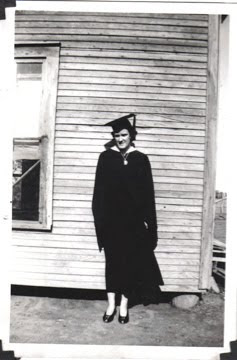 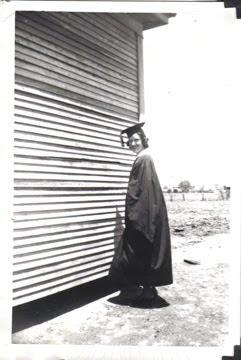 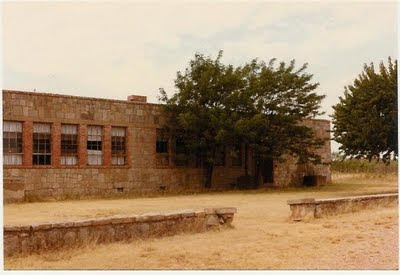 My mother attended school only through the eighth grade. I’m not sure whether any of her older siblings graduated from high school, either, but I believe that most or all of her younger siblings did graduate. They must have attended Bomarton High School, as it would have been the closest high school to their farm at the time, and there are pictures of my Uncle Pete wearing what looks like a school sweater with a big letter “B” on it. One of the high school teachers was my Aunt Johnny, who later married my Uncle Pete.

The top picture shows my Aunt Johnny (second from left in the front row) with some of her students; one of them is my Aunt Lil (far left in the front row). The next two pictures are of my Aunt Rene in her cap and gown. The bottom picture [privately held by Vernetta M.] shows what is left of the Bomarton High School building.

The following is an excerpt from an article on the Bomarton School System from Salt Pork to Sirloin: The History of Baylor County from 1878 to 1930 (Seymour, Texas: Baylor County Historical Society, 1972, pp. 182-183):

“In 1926 Bomarton had a lady superintendent, Mrs. Ware, who advocated,practiced, and defended the wearing of “nicker trousers” by her Biology students because “this progressive age demanded it, and it was more virtuous to wear trousers than the fashionable dresses of today in the biology research work.” J. Ney Thomas, a board member, led the opposition by stating that “Mrs. Ware was setting the wrong example before the High School girls,” and “Wearing of men’s apparel by women is an abomination in the sight of God” (Deuteronomy, Bible). The vote for and against the wearing of trousers was a tie and W. F. Truman, president of the school board, broke the tie by siding with the ladies!

“For many years, Bomarton was one of only three high schools in the County, and at one time had 242 pupils, but in 1950 it succumbed to better educational facilities by consolidating with Seymour Rural High School, although there was a grade school in the community until 1955 that was a part of the Seymour school system.”
Posted by Greta Koehl at 5:47 PM

Email ThisBlogThis!Share to TwitterShare to FacebookShare to Pinterest
Labels: Smile for the Camera