My family owned an Edsel. There, I’ve said it. And I’m proud of it. Sort of.

I was going to call this article “Our Car Wreck,”but first I had to explain the background and the particular car that was involved, our Edsel, and soon realized that it was more about the car than the wreck.

Below is a picture of my mother and our dog Pierre, standing in front of the Edsel, taken in the driveway of our house on Lankershim Street in Highland, California. I think the picture was taken in around 1963. The color was what I think of as the classic white and … metallic blue-green? I’m not sure what to call it (may have to consult a Crayola-64 box), but I believe anyone who saw an Edsel of this color can remember it. 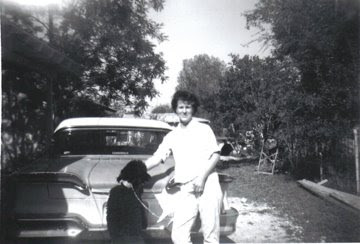 The Edsel brings back mostly pleasant memories and inspires some pride because to me it represents my family’s brief interlude of prosperity at the end of the 1950s and early 1960s. It was the most reliable car I can ever remember my family owning.

“Mostly pleasant memories.” I remember receiving one of only a few “belt hidings” my Dad ever gave me when it was discovered that in a fit of boredom during a long car trip I had etched a tic-tac-toe game on the metal interior of a rear door.

The wreck, however, was not that unpleasant or frightening. Oh, there were a few seconds of sheer terror, but the rest was not so bad. In the early 1960s my Uncle Bill returned from a Navy tour in the Pacific with presents for my family, including a pair of beautiful kimonos for my mother and me and a set of china dishes. However, we had to go pick the china up at the pier, so this involved a freeway trip to one of the Los Angeles piers.

I don’t remember much about the Southern California freeway and highway system, but I do remember that it was confusing and intimidating (at least to my 5-year-old mind). My mother was driving and had brought me and the teenage daughter of a neighboring family (perhaps to read directions?).

The long and the short of the matter is that my mother drove up an off-ramp. To quote the article from the San Bernardino Sun Telegram:

“Two cars smashed headon on the San Bernardino Freeway near Rialto Ave., at 8:12 a.m. yesterday, welding the car fronts together and sending four persons to the hospital with minor injuries.

The cars were a total loss, according to the California Highway Patrol.

The CHP said Mrs. Brunlee got on the wrong side of the Freeway by driving up the 6th St. off-ramp.

She had driven all the way to Rialto Ave. without realizing her error, a highway patrolman said.

At Rialto Ave. she met the car, driven by Mrs. Water;man, coming north in the inside traffic lane.

Wreckers had to cut the two cars apart after the searing impact.

Here is the picture that accompanied the article: 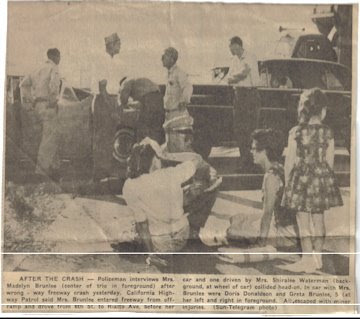 The reporter leans a bit toward drama at the expense of accuracy: our last name was misspelled, my mother’s first name was misspelled, my age was given incorrectly, and perhaps the CHP was in error in evaluating the amount of damage done, but the Edsel was repaired to driving condition. As a matter of fact, the other picture was taken several years after the accident.

It was a matter of wonderment and a little bit of pride in later years that the Edsel had emerged the “victor” in this Clash of Titans, and we always attributed its survival to the solid construction of the Edsel. Of course, on my mother’s part this was always mixed with a bit of chagrin at having been at fault in the accident, though she always pointed out that there was no sign on the off-ramp to indicate what it was or to warn drivers not to enter, whereas immediately after the accident such a sign was erected there.

So, all in all, I am proud of our Edsel. It may not have been one of the high points in automobile aesthetics, but it was reliable and performed well, even after a pretty good crunch-up.
Posted by Greta Koehl at 9:30 AM