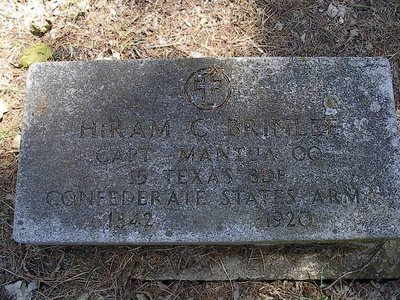 Above is a picture of the tombstone of my great-grandfather Hiram Carroll Brinlee. It reads as follows:

I believe that there are at least two errors in it. The first is the date of birth, 1842. Online genealogies give two dates for Hiram Carroll Brinlee Jr.’s date of birth: 1842 (apparently from his gravestone) and 1844 (apparently from the Bessie Sims Sheppard article in Collin County, Texas, families). I tend to agree with the 1844 date; it is consistent with all but one of the censuses in which Hiram Brinlee, Jr. appears (16 in 1860, 25 in 1870, 35 in 1880, 65 in 1910, and 75 in 1920; on the 1850 census his age is given as 8). The 1900 census did not figure in my original calculations because at that point no one had been able to find him on the 1900 census. The 1844 year of birth would also make the story of the reason for termination of his first enlistment more plausible. If his service enlistment record is correct, he had turned 17 by the date of his enlistment on 10 Sep 1861. That record also indicates that he was discharged June 13 1862 at Camp Maury, Miss by the Conscript Act. The Conscript Act was passed on 13 Apr 1862; it exempted men under age 18 and over age 35 from service, but stipulated that those who qualified for this exemption at the time should continue to serve for an additional 3 months so that replacements could be found. This indicates that he had not turned 18 on 13 Apr 1862 and probably had still not turned 18 by 13 Jun 1862. The day of his birth probably came before the 10th of September in the year, but after 13 June.

Some months after making these calculations, I finally found Hiram on the 1900 census. I had searched both Texas and Oklahoma for him and tried Soundex, but the misspelling of his name still did not show up, so I looked for men named Hiram of the right age in both states and finally found Hiram C. Brinnee in Britton Township, Oklahoma Co., Oklahoma Territory, age 55, born September 1844. So I think this gives a window of September 1 to September 10 1844 for his birth.

The other item which may be misinformation is the rank given on his tombstone, Captain. H. C. Brinlee indicated on his Confederate Pension Application that he had served for about 10 months in Company D, 6th Texas Cavalry, and then again later "under Gano about 1-1/2 years." The Civil War Soldiers and Sailors System indicates that the second period of service was six months in the 3rd Regiment, Texas Infantry State Troops. He may have transferred into the 15th at the end of that service, but it does not show up anywhere that I can find so far. He was a private when he finished his first term, and I suspect he might have finished his second term at the same rank. Perhaps he was called "Captain" in later years. To get the full picture, I will have to do some searching in Footnote and find out more about these units.
Posted by Greta Koehl at 2:33 PM